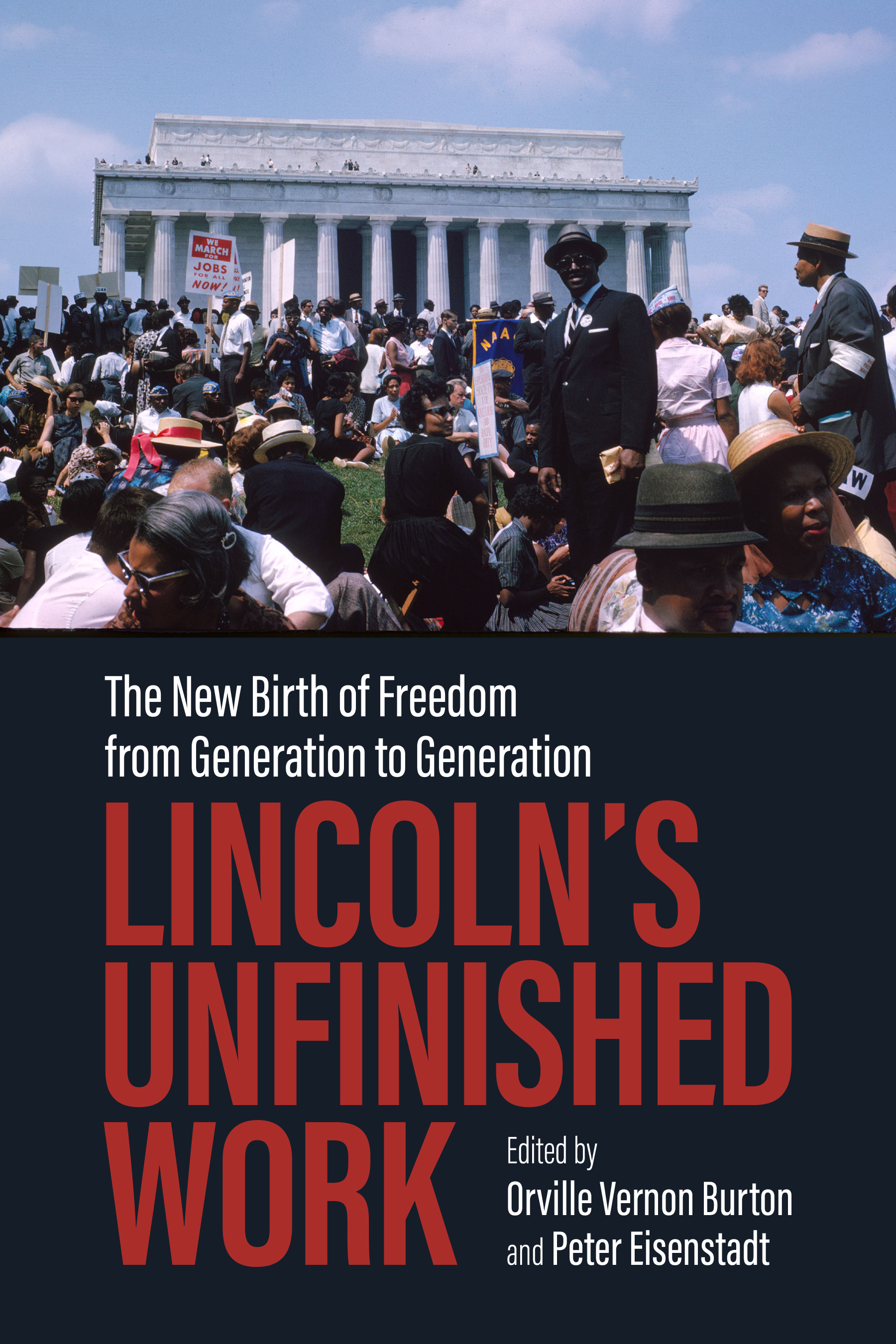 This website is the online companion for the the book chapter "From Ken Burns’s The Civil War to History’s Ancient Aliens: Lincoln’s Unfinished Work on Cable Television" by Joshua Catalano and Briana Pocratsky. The chapter appears in Vernon Burton and Peter Eisenstadt's Lincoln’s Unfinished Work: The New Birth of Freedom from Generation to Generation published by LSU Press. Below you will find images that were not included in the printed version.

Abstract and Argument: This chapter highlights some of Lincoln’s unfinished work by exploring the discursive means by which History assigns value to and legitimizes certain methodologies, ideas, and identities. Using distant reading and close textual analysis of thirty consecutive days of History’s programming, it is clear that the majority of the network’s aired programming is reality television in the guise of historical content. By filming the day-to-day operations of small businesses or micro-industries, such as alligator hunting, the network is able to capture the drama and interpersonal conflict that fuels the interests of television audiences. This “raw” footage is then edited together with short historical-trivia asides that create a veneer of educational merit.

This programming reproduces a narrow conception of masculinity that emphasizes whiteness, manual labor, patriotism, and the mythic frontier situated within a capitalist framework. By entangling this construction of masculinity with a nostalgic, decontextualized, and meritocratic understanding of the American Dream, History caters to an older, predominantly white male demographic and offers programming that aligns with and legitimizes their worldview. Finally, History supplements its reality-television shows with conspiratorial programming that promotes racist ideologies and profits off of a problematic orientation to the factual and evidence-based framework that humanistic and scientific inquiry is built upon. When it comes to historical television programming, Lincoln’s work remains unfinished. 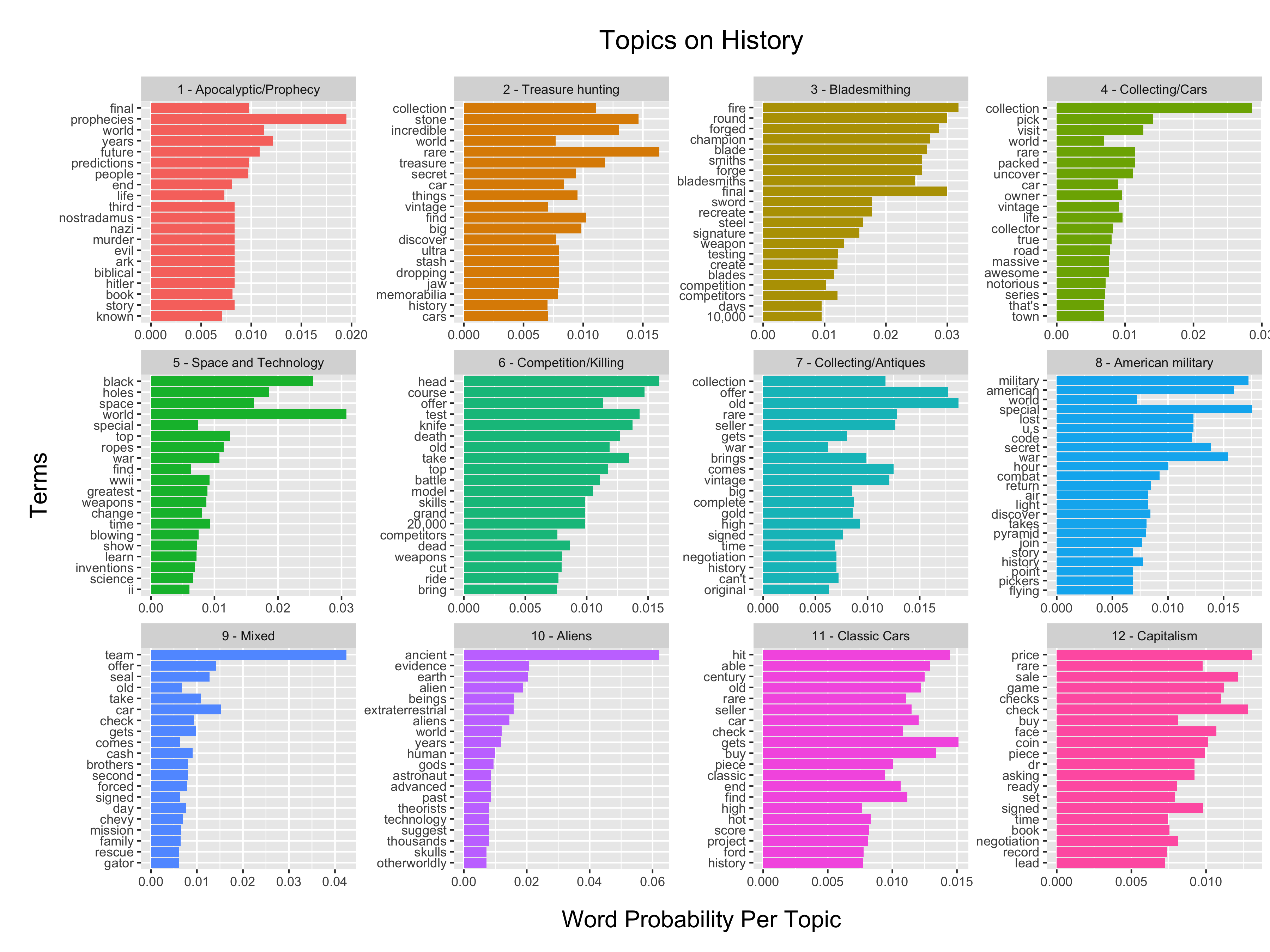 This visualization shows a topic model of the episode descriptions and episode titles for one month of History's programming.

Topic modeling is a method of computational analysis, often referred to as distant reading, that uses word co-occurrences to analyze the themes or topics of a text corpus. To create the corpus, we collected episode titles and descriptions from History’s website for all of the programs aired from May 15 through June 13, 2018. This encompassed 905 total programs with 510 unique episodes. From the corpus, the model generates a specified number of topics based on word co-occurrences and provides a breakdown of what percentage of each topic is contained within a particular text, or in this case, episode title and description. In this way, the themes of History’s programming across shows can be seen in aggregate. To improve the output, we removed duplicated episodes and pruned the vocabulary, omitting proper names and other words unique to the corpus that skewed the model. After creating several topic models, we concluded that twelve topics was the optimal number for the corpus. 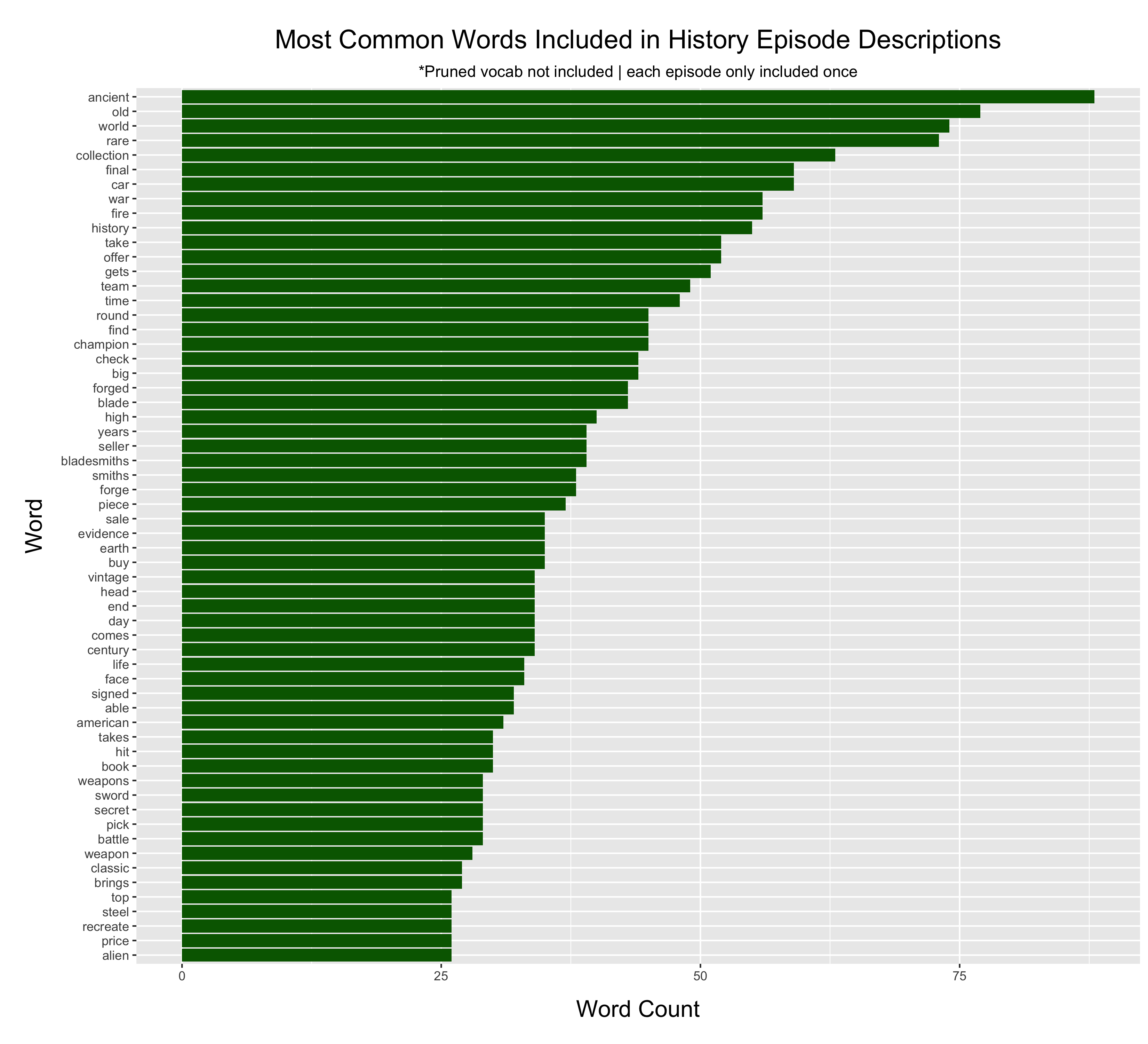 This visualization shows the frequency of the most common words found in the episode titles and descriptions for thirty days of programming on History in 2018. This chart does not include the pruned vocabulary (proper names, articles, and other ubiquitous words).

To gain an understanding of the overall prevalence or frequency of these topics on History, not just their mere existence or inclusion in the topic model, we counted the number of times a particular word appeared in an episode title or description. The most frequently used were “ancient,” “old,” “world,” “rare,” “collection,” “final,” “car,” “war,” “fire,” “history,” “take,” “offer,” and “gets.” Many of these words are more associated with specific topics. For example, the word “ancient” appears in the description of nearly every episode of Ancient Aliens as do the words “fire” and “final” in the show Forged in Fire (the names of the shows were not included in the model). Other words related to the themes of Capitalism and Collecting/Antiques, such as “buy,” “take,” “offer,” “car,” “war,” and “get,” are present in the descriptions of several shows, including Pawn Stars, American Pickers, and Counting Cars. 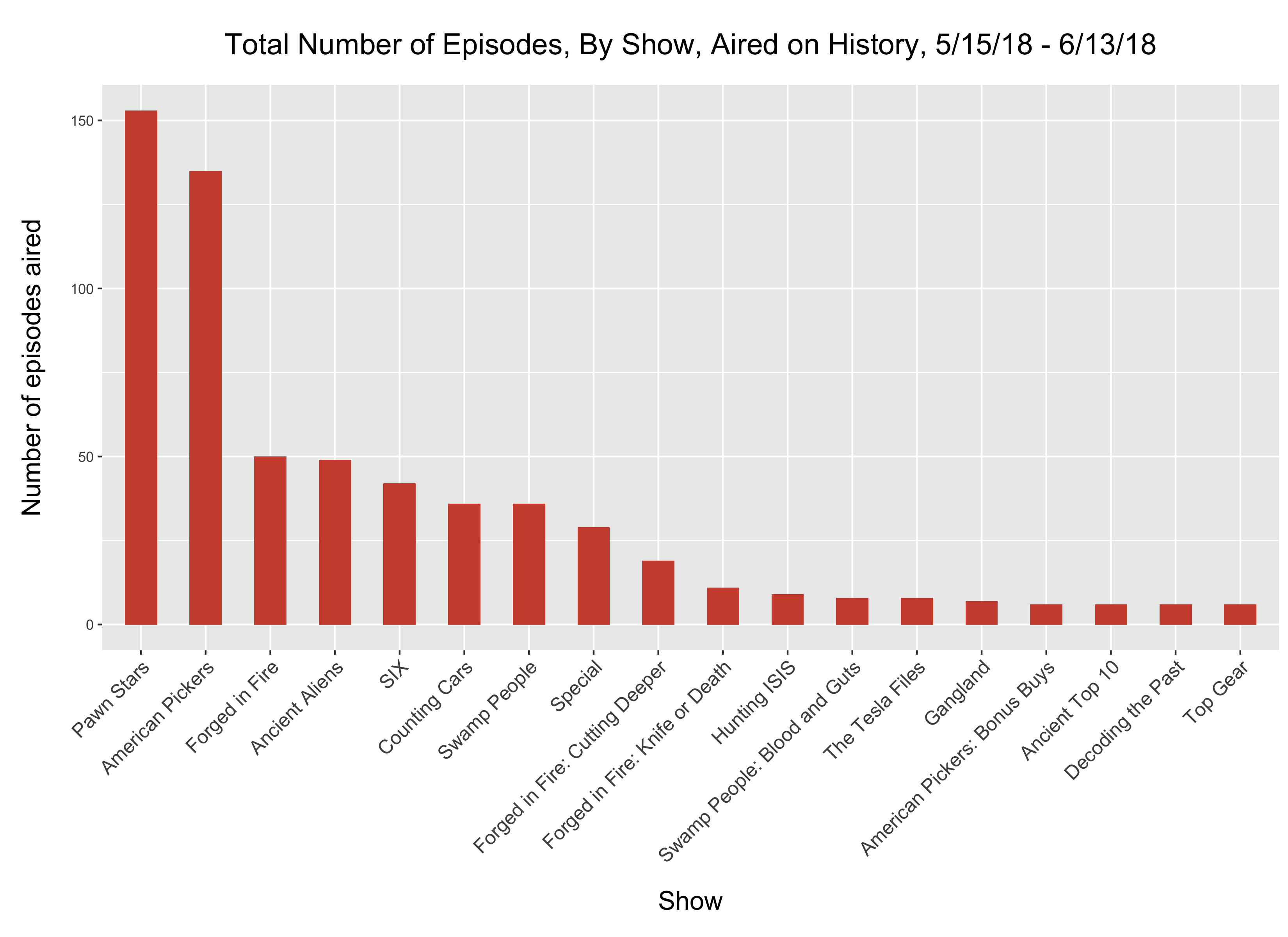 This visualization shows the total number of times that an episode of each show aired during the thirty-day sample period.

After examining the models, we performed a close textual analysis of several episodes of the most frequently aired programs. The most frequently aired shows were Pawn Stars, American Pickers, Forged in Fire, Ancient Aliens, SIX, and Counting Cars. A close reading of these shows revealed not only the themes of capitalism and conspiracy but also an underlying thread of masculinity.

Code: The code and data used to make these visualizations is available on Github.

Acknowledgement: Portions of this chapter were first published in Current Research in Digital History. We would like to thank the reviewers and editors at both CRDH and LSU Press. We would also like to thank our fellow panelists and the audiences at the American Sociological Association and Lincoln’s Unfinished Work conferences for their comments and suggestions. We would especially like to thank the members of the Clemson University Humanities Hub who provided feedback on the chapter.